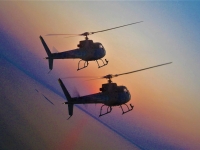 The Brazilian armed forces have purchased 27 single-engine light utility H125 helicopters, Airbus announced. The move is due to increase training capacity of the Brazilian Navy and the Air Force.

The H125 helicopters will be produced at Helibras factory in Brazil, where the H225M multi-purpose military helicopters are already assembled, Airbus wrote in a statement released on September 16, 2022. The new H125s will replace the ageing AS350 and Bell 206 helicopters.

According to the manufacturer, the new H125s will be equipped with a G500H TXi double glass cockpit as well as a VEMD [vehicle and engine multifunction display- ed. note]. The helicopter will also feature night vision goggles (NVG) and other specific military equipment, including a winch and a hook.

“The H125 is a versatile helicopter used widely in both the civil and military markets as a training platform thanks to its ruggedness, reliability, and easy maintenance,” Airbus Helicopters chief executive Bruno Even explained. “We are honored by the continued confidence of the Brazilian armed forces after more than 40 years of cooperation.”

The Brazilian armed forces believe that the renewed helicopter fleet should meet their needs for the upcoming 30 years. Its current fleet consists of a total of 156 Airbus helicopters, which are operated across eight bases in Brazil.

More than 5,350 H125 helicopters are in active operations around the world as of September 2022, according to Airbus.