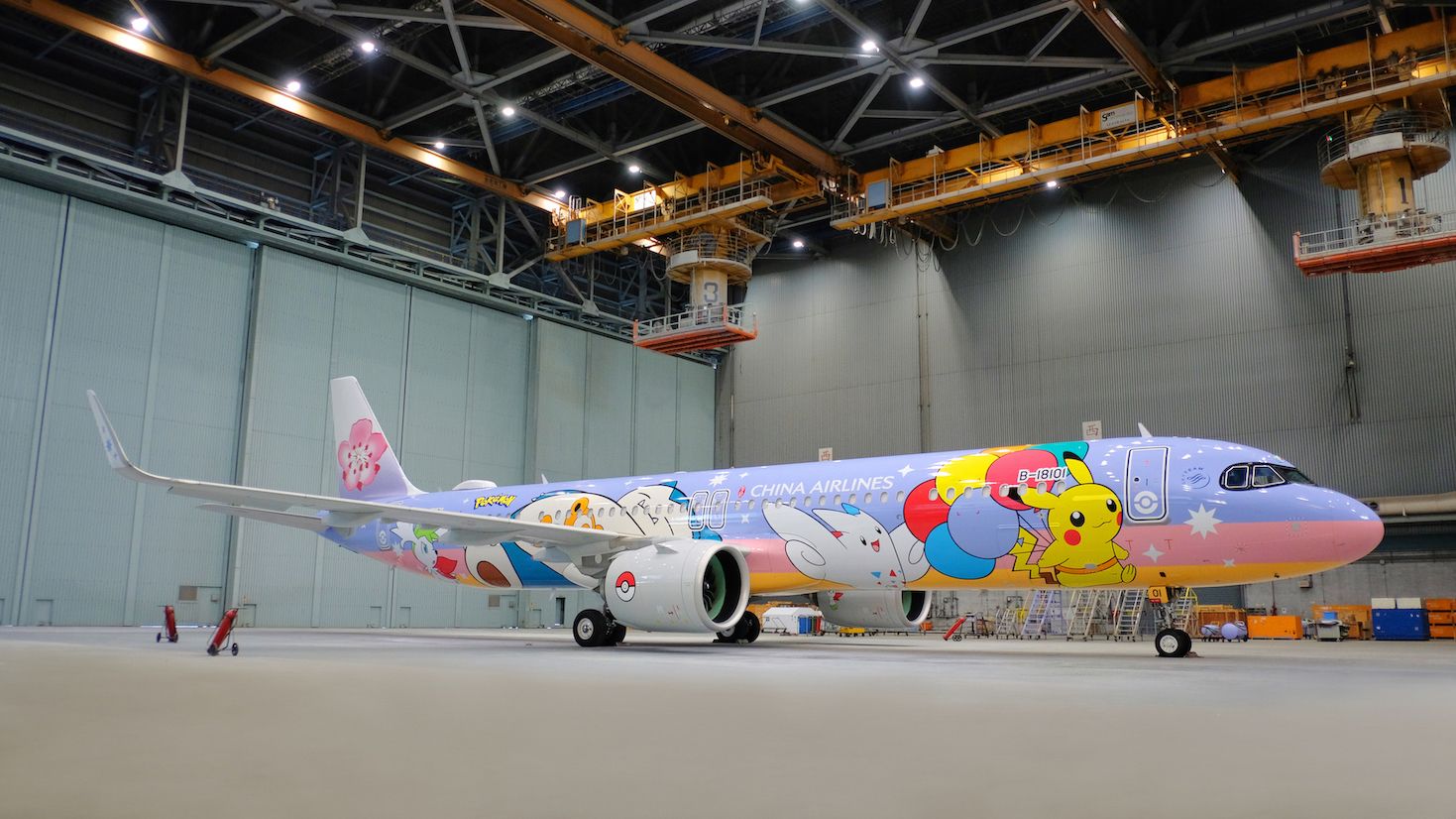 https://simpleflying.com/tag/flights/On September 28th, Taiwan’s flagship carrier China Airlines finally revealed its ‘Pikachu Jet CI,’ featuring the first-ever Pokémon liveried aircraft in Taiwan. The uniquely adorable livery was painted on one of the airline’s Airbus A321neo aircraft registered B-18101, which was also the first of the aircraft type delivered to the airline in November last year.

The painting process utilized about 36 different types of paint, with the fuselage progressively painted with pastel orange, pink, and violet hues. Such bright pastel colors complement China Airlines’ corporate colors and the plum blossom logo on the tailfin, allowing the gradient to create a starry night sky emerging into dawn.

China Airlines Chairman Su-Chien Hsieh celebrated the revealing of the new livery and recognized the significant efforts required to make it come to life, commenting:

“The Airbus A321neo aircraft chosen for the livery is the latest next-generation passenger aircraft to be introduced by China Airlines. Painting the livery was an international effort involving the best engineers at China Airlines Maintenance Division and Japanese painting experts who traveled all the way to Taiwan.”

Including Pikachu, the primary featured Pokémon, the livery featured a total of eleven Pokémon characters such as Togekiss, Munna, Jigglypuff, Snorlax, Swablue, Slowpoke, Teddiursa, and Shaymin. A slightly more specific detail is that a hidden egg with Pikachu and Shaymin is visible above the cockpit window, greeting the world as though they were pilots flying the aircraft.

In the spirit of the ‘Pokémon Air Adventures’

Given that Taiwan was one of the more restricted countries in the post-pandemic aviation era, China Airlines hopes that the liveried aircraft will bring nostalgia and added excitement to passengers as they reach their vacation destination. But before ‘Pikachu Jet CI’ embarks on its first commercial passenger flight, the Taiwanese carrier has organized a one-day charity micro-trip on September 30th for the Taoyuan-Taipei/Songshan route.

Then on October 2nd, the unique aircraft will take off on its first flight on the Taipei/Songshan-Tokyo/Haneda route carrying Pokémon fans of all ages. To celebrate the inaugural flight of the special livery, several Pokémon characters, upon check-in, will join passengers in the form of boarding passes and name tags. Onboard, exclusive Pokémon-themed supplies, such as themed meals, tray mats, paper cups, pillows, and mixed snacks, will also be featured on the aircraft.

Before departure on the liveried aircraft, passengers on Asia, Palau, and Guam flights can order the exclusive Pokémon merchandise and collect it during their flights. Photo: China Airlines

Passengers will be well-entertained with 10 specifically-selected Pokémon animations available on the entertainment system, and the cabin crew will be decked in aprons featuring Pikachu during meal service. In addition to the aircraft amenities, merchandise developed by China Airlines and the Pokémon Company will also be available. These merchandises include the China Airlines’ “Pikachu Jet CI” aircraft model, mixed snack gift box, tote bag, and flight attendant apron that will be progressively released before the first quarter of next year.

China Airlines’ unveiling of the special livery was just the latest in the heat of airlines collaborating with The Pokémon Company, the most recent was Singapore’s low-cost carrier Scoot in August. While only the charity route and first flight have been announced, the Taiwanese carrier will likely primarily deploy the Pikachu Jet CI on its flights to and from Japan. Regardless, passengers flying on the liveried aircraft are certainly in for an exciting flight experience.

What do you think of the Pikachu Jet CI’s livery? Which is your favorite Pokémon character? Let us know in the comments below!