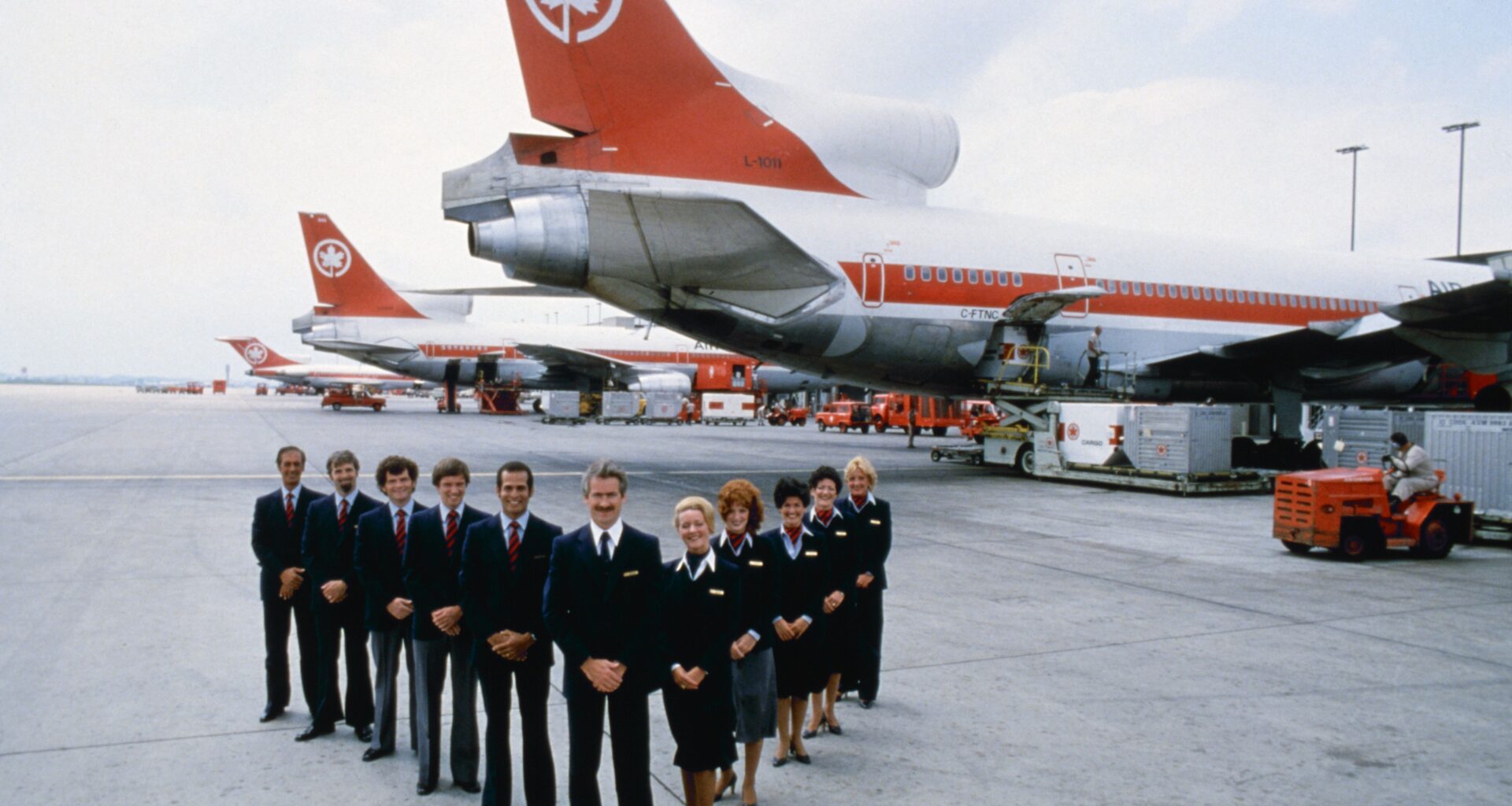 Inside The Colorful History Of Air Canada

As the flag carrier of Canada and the largest airline based in the country, Air Canada has a rich history that spans over eight decades. The founding member of Star Alliance is headquartered at Saint-Laurent, Quebec, and flies to over 220 destinations across its global network, with its diverse fleet of short, medium, and long-haul aircraft.

Air Canada traces its roots back to April 1937 with the formation of Trans-Canada Air Lines (TCA). The company went on to pioneer commercial passenger aviation across Canada throughout the decades. The business changed its name to Air Canada in 1965 before becoming privatized in 1988. As an international powerhouse, the airline has adapted to the ever-changing conditions of the aviation industry, now serving up to over 50 million passengers each year.

The Canadian government formed TCA on April 10th, 1936, as a subsidiary of the Canadian National Railway (CNR), a company that was created back in December 1918. The Department of Transport sought a carrier to link cities between the two coasts of the country. Thus, the new state outfit acquired a Boeing Stearman and two Lockheed Electras from Canadian Airways.

The first passenger flight was in September 1937, kicking off a fresh start in Canadian aviation. Early operations were a mix of passenger and mail services. Still, passenger service began to snowball, with the airline hiring its first flight attendants in the summer of the following year.

By the time the 1930s were over, TCA had boasted approximately 500 members of staff. This progress was highlighted by the launch of transcontinental flights on April 1st, 1939. The carrier’s 12 Lockheed Model 14 Super Electras and six Lockheed Model 18 Lodestars helped with these long-distance missions.

TCA relocated its headquarters to Montreal from Winnipeg in 1953, the same year the carrier became the first across the globe to utilize computers with remote terminals for reservations. The airline wasn’t afraid to keep shaking up operations, including its fleet, which saw the arrival of several types, such as the Vickers Vanguard turboprop in the 1960s.

In a bid to better connect it with the world in the new era, a bill was put forward to change the airline’s name in 1964. However, it had to be submitted a second time for it to be passed. As a result, the name Air Canada was made official on New Year’s Day, 1965.

Even though the name was now formalized, it wasn’t the first time the airline used the Air Canada moniker. It was previously used for promotion in French-speaking markets. Air Canada carries on the TCA legacy with its maple leaf logo, which is synonymous with the country the airline represents.

Air Canada showed its industry leadership in this new climate. For instance, after introducing its first business class in 1983, it became the first carrier in the world with a non-smoking policy across its fleet in 1987.

Even before this revolution, the airline’s CEO, Pierre Jeanniot, introduced the airline’s first non-smoking flights after receiving letters from medical associations about second-hand smoke concerns. Technological innovations also continued, such as the introduction of Air Canada’s Reservec II, which was billed as the first real-time computer reservation system worldwide.

The operator received its first Boeing 747 in 1971, just a year after the jumbo initially entered service. The company would hold the -100, -200, and -400 variants, which were also split between different versions. Altogether, it had a 33-year relationship with the Queen of the Skies, with the last units leaving the fleet in 2004.

The Air Canada Public Participation Act was passed in 1988, which saw the federal government sell 45% of its interest in Air Canada. As a result, the company became privatized. However, the aviation industry soon had to deal with the complications caused by the Gulf War, which saw the airline’s strategy shift in the 1990s.

The corporate headquarters was moved to Dorval Airport, and during this period, there were structural changes and new routes launched. By the middle of the decade, the company was reporting profits again, and it inaugurated 30 routes to the United States, making the most of the recently launched open skies agreement with its neighbor.

The international growth continued into 1997 when Air Canada became a founding member of Star Alliance in May of that year. The company shares that it started the organization as it wanted to form an alliance that would improve the travel experience of passengers “for whom flying is a way of life.”

This move set Air Canada up for a solid start to the new millennium. The airline kicked off 2001 by purchasing compatriot Canadian Airlines to bolster its national presence. However, existing troubles, such as ongoing financial worries and recent pilot strikes, caught up. Furthermore, Canadian Airlines was in a worse situation than initially believed before it was purchased.

Subsequently, Air Canada filed for bankruptcy protection on April 1st, 2003. Nonetheless, the carrier overcame these issues 18 months later and started its next chapter with the Airbus A340 replacing its Boeing 747-400 aircraft.

Keeping up with the times

Carrying on its love for technology, the carrier has implemented a series of modern measures in the modern era. SeatMaestro notes that, in the mid-noughties, Air Canada became the first airline to introduce seatback IFE on smaller short-haul jets, the first North American carrier to implement 2D barcode scanning on boarding passes and receipts, and the first North American operator to use electronic boarding passes for mobile check-in. It also released its mobile app in 2009.

The investment wasn’t exclusive to customer service tech. The airline has continued to upgrade its fleet over the years, including the delivery of new Boeing 787 Dreamliners from 2014. The carrier also took delivery of its first Airbus A220 in 2019.

Overall, these investments are part of Air Canada’s broader mission. The carrier is keen to keep developing with a focus on the passenger experience.

“Air Canada is pleased to offer our customers the utmost in comfort, technology, and innovation. Our ever-growing and ever-changing fleet reflects our commitment to our customers and our desire to be at the forefront of the aviation industry.”

Catering to additional sectors, Air Canada Rouge commenced operations in 2013. The low-cost carrier operates alongside the mainline and the Air Canada Express regional outfit to balance services across the company’s route map.

Air Canada Jetz also provides charter flights. While the Air Canada Tango and Zip experiments only lasted for a few years at the turn of the century.

The global health crisis had undoubtedly rocked operations, and the airline reported an operating loss of $3.776 billion in 2020 compared to an operating income of $1.650 billion the year before.

Even though other regions, such as the United States, saw recovery as early as 2021, it took a while longer for Canada’s market to get back on track. The country’s government continued to implement notable travel conditions across the country, particularly when it came to international traffic.

Just last month, Canada dropped mask and testing requirements. As a result, Air Canada has been preparing for a robust schedule for summer 2023, with scaling up in key segments, including Europe and Japan. In this next chapter, the airline is keen to continue its mission to “support local tourism and hospitality sectors as customers in all six continents reconnect.”

Today, Air Canada has a mixed fleet of A220, A320 family, A330, 737 MAX, 767, 777, and 787 Dreamliner aircraft. These planes combine seamlessly to transport both passengers and cargo across the firm’s global network. Overall, history has shown us that Air Canada has managed to adapt well in its 85-year journey. It will be keen to continue its ever-lasting growth heading into next year.

What are your thoughts about the history of Air Canada? What do you make of the carrier’s overall journey over the years? Let us know what you think of the airline and its history in the comment section.