Pilots and other crew often talk about aircraft weight and balance, but the significance of these two important elements is not widely understood. In aircraft operations, these two components are intrinsically connected, because the weight and its distribution affects the balance of the aircraft.

An aircraft can be thought of as a giant seesaw. Just like a seesaw, the airplane can tilt up or down based on how the weight is spread out.

The Center of Gravity, or CG for short, is the point on an aircraft where all its weight is concentrated. It is important because all the other forces occurring on an aircraft act through this CG. So, the position of the CG determines the effect of these forces on an aircraft. 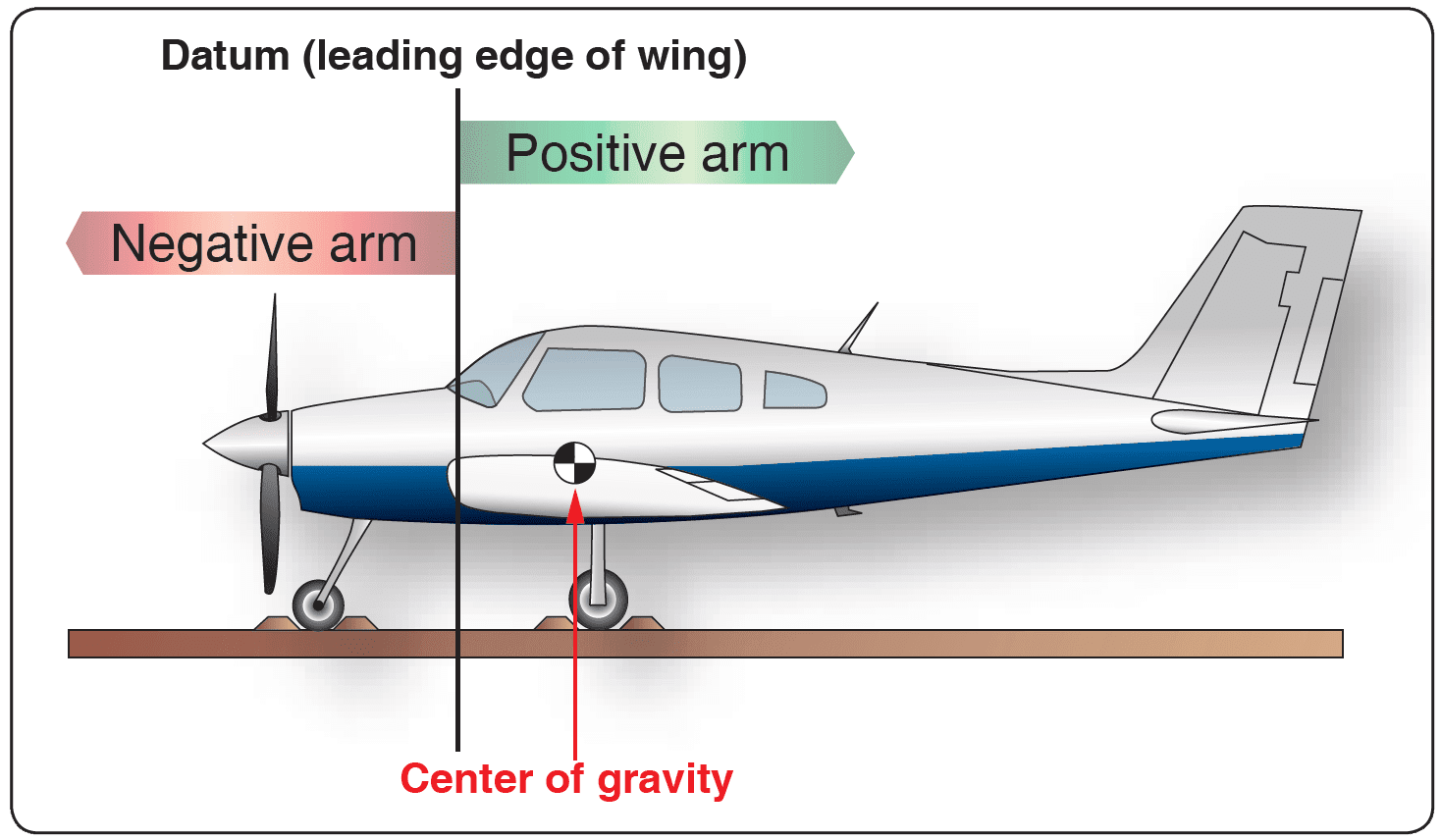 When in level, unaccelerated flight, there are four main forces that act on an aircraft. These forces are the lift, weight, thrust, and drag. For an aircraft to remain in equilibrium, these forces must be in balance.

The diagram below shows these forces labeled on an aircraft. The weight acts through the aircraft CG and the lift is generated by the wing. For explanation purposes, it can be considered as acting through the wing aerodynamic center (the point where the moment generated by lift force remains constant), thrust, which is generated by the engines, and the drag, which opposes the thrust.

In the real world, these forces cannot remain in balance. If you have a closer look, you will be able to see that the lift occurs at a certain distance from the CG. This means the lift force with the weight generates a pitch-down moment (clockwise). This is called the lift-weight couple. Also, the thrust acts below the CG, and at the same time, the drag is above the CG. This creates a pitch-up moment (anticlockwise). This couple is known as the thrust-drag couple. In most aircraft, the lift-weight couple is many times stronger than the thrust-weight couple. So, the net moment is a strong pitch-down moment.

A good question to ask at this point is that if lift-weight couple generates this very large pitch-down moment, how does an aircraft fly straight and level? This is where the tail of the aircraft comes into the picture. The horizontal stabilizer of the aircraft is designed to generate negative lift (in almost all commercial airliners). This negative lift, which acts downwards, acts through the CG generating an anticlockwise moment to oppose the lift-weight moment. Thus, the horizontal stabilizer must be trimmed by the pilot such that the force generated by it is enough to keep the nose of the aircraft pointing up.

The horizontal stabilizer generates a negative lift which opposes the nose down pitch motion. Photo: Airbus.

As you can now imagine, any movement in CG will affect the aircraft’s balance. For example, if it were to move forward, the distance between lift force and CG increases, which in turn increases the strength of the nose down pitch moment. This requires the pilot to manipulate the horizontal stabilizer a lot more to generate a large enough opposing force to keep the aircraft straight and level. Similarly, if the CG is moved back or aft, the nose-down pitching moment reduces, and less drag must be generated by the horizontal stabilizer.

So, the location of the CG must be such that the aircraft remains stable, but at the same time, it must be also controllable with less effort. Consequently, it is a compromise between these two very important factors.

The CG location is a compromise between handling and stability. Photo: Airbus

How the CG is controlled during takeoff, cruise and landing

The location of the CG during takeoff must take into several factors.

The nose wheel of an aircraft is what steers it during the initial parts of the takeoff, where the rudder is not effective due to the lack of airflow. During this period, the nose wheel steering must be able to fully control the aircraft. The more load that is placed on the nose wheel, the more it sticks to the ground and the more effective it becomes. Hence, the CG must be at a location where there is enough load placed on the nose wheel. If it is too far back, the nose may lift off early or may not be able to provide steering for the pilot, leading to a dangerous situation.

An aircraft loaded forward has better nose wheel steering capability as it sticks more to the ground. Photo: Airbus.

The handling during the rotation

As previously discussed, the more forward the CG, the more effort is required to control the aircraft. So, if the CG is too forward, the pilot might have a difficult time getting the aircraft airborne.

Therefore, the CG must be at an optimum location where the aircraft has good control characteristics while maintaining acceptable stability.

A more forward CG makes it difficult to rotate the aircraft for takeoff and at the same time a more aft CG can lead to a tail strike. Photo: Airbus.

During the cruise portion of the flight, as mentioned and explained in detail in the earlier paragraphs, the aircraft is balanced with the help of the force generated by the horizontal stabilizer. Here, we are going to look in more detail at what happens when the CG moves.

Imagine an aircraft flying straight and level, and a sudden gust causes it to pitch up. Previously, we saw that the lift acts behind the CG. So, when the gust generates an angle of attack on the wing, the lift force increases, and it generates a nose-down moment opposing the gust. This happens without any input from the pilot.

This is known as longitudinal static stability. It happens because when the gust tried to force the aircraft nose up, the lift opposed the gust and helped the pilot to return the aircraft to equilibrium. It shows that the aircraft is stable in pitch axis.

However, there is a point where if CG is moved too far back, the moment generated by the lift also leads to an unstable pitch-up condition. This occurs when CG goes behind the wing aerodynamic center. When the CG is exactly at the aerodynamic center, the lift can no longer generate a moment because there is no arm for it to do so. So, it is neutral in terms of moments.

For this reason, it is known as the neutral point. Once the CG moves behind the neutral point, the lift force generates a pitch-up, anticlockwise moment. In this condition, if a gust were to attack an aircraft, it would go into a nose up, highly unstable state.

To conserve the natural stability of the aircraft, the CG must never be allowed to go behind the neutral point. Photo: Airbus.

The conclusion is, in cruise, to ensure stable flight, the CG must never go behind the neutral point.

During landing, there are two main factors to consider. One is that on final approach to landing, the flaps are lowered. This usually generates a net pitch-down moment. This moment must be then countered by the horizontal stabilizer. As with takeoff, a forward CG increases the magnitude of the nose down pitch moment, which requires a higher downward lift from the horizontal stabilizer.

As the stabilizer itself is a control surface with a limited amount of movement, a point may be reached where it can no longer counter the pitch-down moment and enter a tail stall. Thus, the CG must not be too forward.

Also, an important factor to consider during the landing is a go-around. In a go-around, the engines are pushed to their maximum. And as most airplanes have underslung engines, this itself generates a nose-up pitch moment. If the CG is too back or aft, it can

lead to a larger nose-up pitch effect. So, the CG must not be too aft to ensure that the aircraft’s nose does not keep on rising to the point where the pilot loses control of the pitch attitude.

During high thrust go around, an aft CG may lead to an uncontrollable pitch up event. Photo: KLM Royal Dutch Airlines

The relationship between the CG and fuel burn

In long-range aircraft, during cruise, the CG moves mainly due to fuel burn. This affects fuel consumption.

When the CG is aft, the negative lift that is required to be generated by the horizontal tail decreases. The opposite is true for forward CG. The lift generates induced drag, and thus the more the drag, the more the fuel burn.

The more the lift the tail generates the more the drag. Photo: Airbus.

So, during flight, if the CG can be kept at its optimum aft position, fuel can be saved in a long-range flight. To do this, in some aircraft there is a trim tank. This trim tank is filled up with fuel, and it is usually located inside the horizontal stabilizer. When the fuel in the wing tanks burn, the CG moves forward. This is sensed by the onboard computers, and a command is sent to move fuel from the trim tank to the wing tanks – this moves the CG back again.

The picture below shows the scheduling of fuel transfer from the trim tank to the wing tanks in an Airbus A330 during a typical flight.

Efforts to open air transport markets across Africa are gaining steam, with…