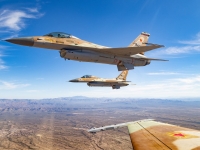 Under the five-year contract valued at $175 million, Top Aces will provide advanced adversary air training to pilots at Eglin Air Force Base (Eglin AFB) in Florida and Luke Air Force Base (Luke AFB) in Arizona.

To do so, it will make use of a fleet of 29 ex-Israeli Air Force General Dynamics F-16A fighter jets that were specifically modernized for the needs of the company.

“With our fleet of F-16 AAFs, we deliver a caliber of adversary air training that was previously non-existent. Our commitment is to deliver professional excellence and significant cost efficiencies,” says Russ Quinn, President of Top Aces.

Top Aces was among seven contractors to be awarded $6.4 billion worth of contracts to provide realistic training, known as adversary air services (ADAIR), to the USAF in October 2019. It recently merged with Blue Air Training, another training provider headquartered in Las Vegas.