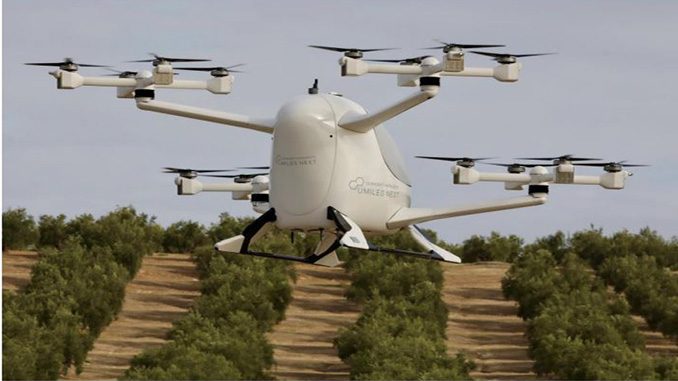 The test was part of Uspace4UAM, an urban mobility project under a consortium headed by Honeywell International, that is aimed at integrating operations of manned and unmanned vehicles into urban settings throughout Europe.

During the test, the Concept Integrity flew with a number of other unmanned aircraft in a demonstration designed to show that unmanned air traffic can be “safely and seamlessly integrated into urban areas in the near future,” the company said in a statement.

The Concept Integrity aircraft was equipped with technology developed by Umiles Next’s research partner, Technalia, called FlyFree. The test flights took place at the ATLAS Test Flight Centre in Villacarrillo, Jaén, where numerous aviation technologies, including light and tactical remotely piloted systems have been tested. Umiles Next said the flights represent steps toward the regular use of air taxis in cities.

“This is a significant milestone towards the integration of these aircraft into urban airspace, as defined by the European Uspace4UAM project, which seeks to test and demonstrate effective management of urban air traffic featuring unmanned aircraft,” Umiles Next said.

Besides Honeywell, companies participating in the Uspace4UAM project include eVTOL maker Vertical Aerospace and air navigation company ENAIRE. Umiles Next said mobility in the future will be “smarter and more sustainable than ever before” as autonomous air taxis help relieve transport congestion on the ground. The company said the vehicles and systems it is working on “are set to become real transport options by 2028.”