A new plane for Volaris

Volaris has recently taken delivery of its 115th aircraft, an Airbus A321neo. On October 19, the Mexican ultra-low-cost carrier operated a flight between Hamburg and Mexico City, with two stopovers, one at Reykjavik Airport (KEF), Iceland, and one at Gander Airport (YQX) in Canada.

To take the delivery, Volaris took the opportunity “to reinforce its commitment to promote actions that raise awareness of the importance of inclusion in one of the industries with the lowest representation of women,” it said in a statement. The airline carried out the entire aircraft delivery process with an all-female administrative, mechanics, and pilots team. Ten women brought the aircraft from Germany to Mexico.

“It is an indescribable experience because of the excitement of bringing the 115th aircraft and because we have the opportunity to write a ‘little piece’ of the great Volaris history. It is an honor to grow alongside women who, with their leadership and professionalism, are setting a very important precedent in our industry,” said Captain Viridiana Ramirez, a pilot with more than 16 years of experience at Volaris. 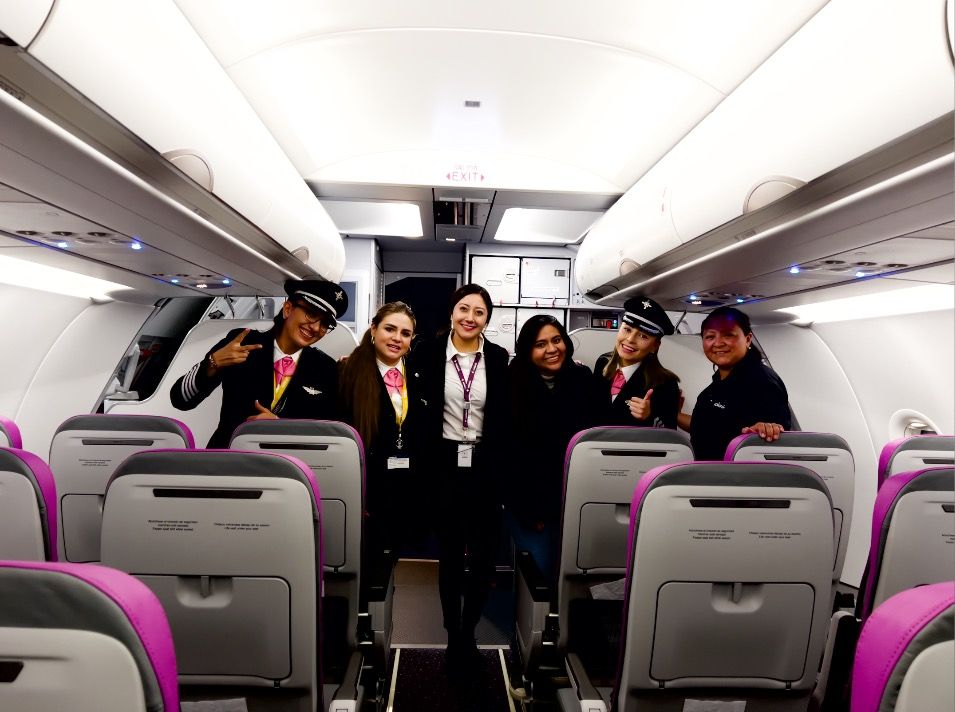 Indeed, gender equality is one of the main goals of the airline industry. For instance, the International Air Transport Association (IATA) recently created the 25by2025 initiative, which looks to make the sector more gender-balanced. IATA, in particular, has committed to increasing the number of women participating in events, panels, and conferences, as well as the number of women appointed to IATA governance roles and top senior positions to a minimum of 2025.

On average, Volaris has one female captain for every two aircraft. The airline added that the total number of female pilots in the company is about 5%, a figure similar to that of international carriers such as American Airlines and Air New Zealand, and above the industry average in Mexico (2.1%). Likewise, 87% of operational managers are women and hold 26% of leadership positions.

The Mexican ultra-low-cost carrier has one of the largest narrowbody fleets in the Latin American region, plus the largest unfilled order. It expects to receive more than 100 new Airbus A320neo-family aircraft in the coming years.

At the end of the second quarter in 2022, Volaris had a fleet of 113 aircraft, according to its website. The airline has been heavily increasing its fleet size in the last year. At the end of 2021’s second quarter, the airline only had 92 planes. Now, the fleet size has increased to 115. This allows Volaris to offer around 3,628 flights per week and 710,704 seats, with an average of 195.7 seats per flight. Compared to October 2021, Volaris is offering 16.2% more flights and 24.7% more seats.

Have you flown with Volaris? How was the experience? What do you think of the airline’s gender equality initiatives? Let us know in the comments below.