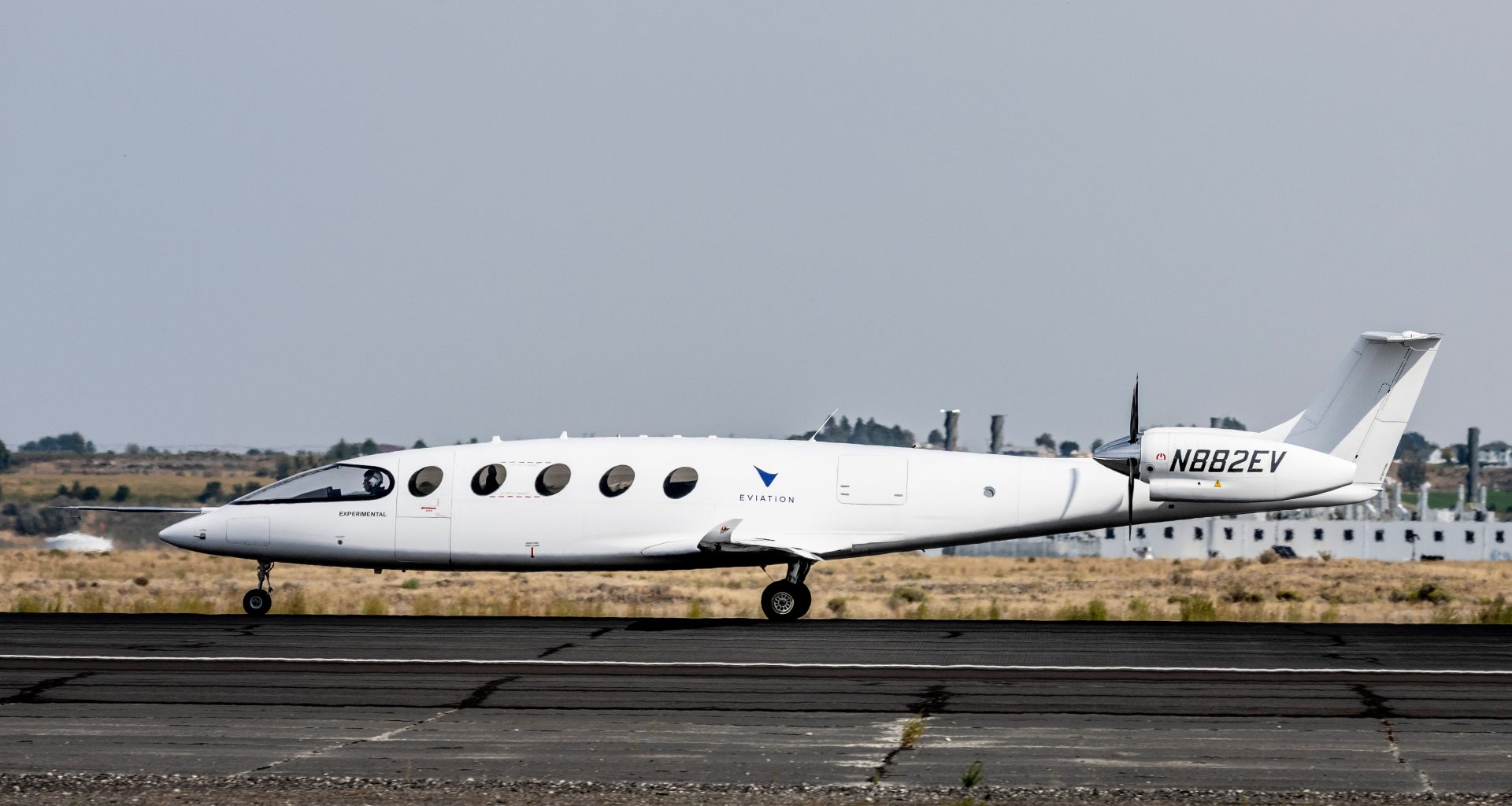 The all-electric aircraft Alice took to the runway Monday to perform a series of high-speed taxi tests as it prepares for its first official flights. The trials pushed the aircraft’s electric motors and systems to perform a range of speed and maneuverability exercises as it prepares to enter commercial services as early as 2024.

A video shared by Eviation, the company behind the project, shows the production prototype racing down the runway as it prepares for liftoff. While the nose of the aircraft left the ground on several occasions, the entire aircraft must remain grounded until the final clearance is given for test flights.

Alice… who the heck is Alice?

The aircraft was initially announced at the 2019 Paris Airshow. Named after Lewis Carroll’s iconic character, Alice is a nine-passenger, two-crew member aircraft, which produces zero carbon emissions, significantly reduces noise, and costs a fraction to operate per flight hour compared to jet aircraft.

The aircraft is powered by two magni650 electric propulsion units from magniX and includes an advanced fly-by-wire system produced by Honeywell. The company behind the product, Eviation, is looking to fit the specific niche of sub-500-mile routes that can be conducted using existing battery technology with a single-volume, high-energy density battery system.

Company President Gregory Davis highlighted that around half the world’s air travel is less than 500 nautical miles, resulting in a flight time of one and a half to two hours. This segment is critical for the size of the aircraft and passenger configuration.

The Federal Aviation Authority’s Part 23 certification rules cover airplanes that weigh less than 19,000 pounds (8,600 kg) and carry 19 or fewer passengers. Nine passengers are the maximum number a single pilot can fly under Part 135 operations in the United States. The aircraft’s seating configuration allows the flights to carry a combination of the pilot, cabin crew, or even a trainee pilot on its short hops, depending on the customer’s needs.

Eviation calls it the “world’s first all-electric commuter aircraft,” and it will focus on providing premium solutions for small-scale travel. The cabin is one of the widest in its group, with a width of 6 ft 4 in (1.93 m) and 22-in (55 cm) high / 16.5-in (41 cm) expansive panoramic windows that are being predicted as the largest in their class when the final product debuts.

Alice will arrive in three configurations. A commuter edition will seat nine passengers in addition to two crew members, ideal for short hops where convenience is essential. Regional carrier Cape Air announced it signed a letter of intent to purchase 75 of the commuter variant of the aircraft earlier this year in a bid to become the Caribbean’s first electric airline. The Massachusetts-based carrier currently flies around 400 regional flights daily to nearly 40 Northeast, Midwest, and Caribbean cities.

The company is billing the aircraft as the first all-electric commuter aircraft. Photo: Eviation

Charter carrier Global Crossing Airlines (GlobalX) has ordered 50 aircraft to operate carbon-neutral charter services between the Bahamas, Florida, and the Caribbean, with deliveries expected to begin in 2027.

DHL has already eyed the cargo edition of the aircraft for its forthcoming all-electric DHL Express network as it looks to take steps to build a more sustainable future. The transportation company announced an order for 12 of the cargo-version last year, which it aims to utilize to shuttle priority packages from major hubs to smaller locations for transfer into vans for final delivery.

DHL has ordered 12 of the electric aircraft for its Express arm. Photo: DHL

An executive version of the aircraft is also in development. The luxury configuration will include features including an accessible side panel with a foldable table, a personal power outlet, a USB port, and up to 850 lbs (385 kg) worth of storage.